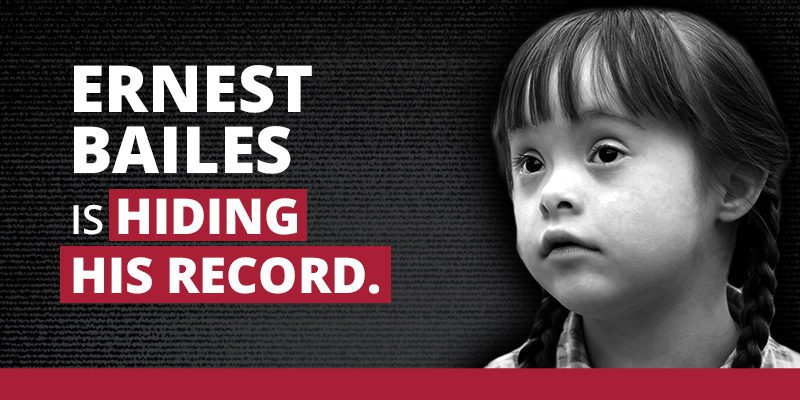 After being penalized on the Pro-Life Scorecard and criticized on the campaign trail for his anti-Life statements and positions, Ernest Bailes is attempting to rewrite history.  After entering opposing statements to Pro-Life amendments in the Journal of the Texas House, he has now gone back to the House Journal and struck his name from opposing these six Pro-Life amendments, described below, to Senate Bill 1.  Bailes’s recent actions indicate that he feels threatened by his challenger in the March 2018 primary election and therefore hopes to hide his failing record on life from his constituents.

Through registering his position in the journal on Senate Bill 1, the state budget for the 2018-2019 biennium, Bailes showed that he would have voted:

No other Republican, except the proudly pro-abortion Sarah Davis, registered against so many Pro-Life amendments, and many anti-Life Democrat members did not even go so far as to take this additional action. 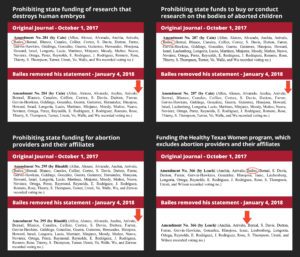 During his first term as a member of the Texas House of Representatives, Ernest Bailes (R-Shepherd) earned an abysmal 42% on the Pro-Life Scorecard, receiving the distinction of the only freshman legislator on the 2017 Disappointments List.  What exacerbates his dismal Pro-Life record in the House is that he campaigned as a Pro-Life candidate, and he has hit a new low in attempting to manipulate his constituents again during his re-election bid.

Several anti-Life votes contributed to Bailes’s low score.  He voted against an amendment to protect preborn babies diagnosed with disabilities from late abortions, then went a step further to solidify his anti-Life vote with an anti-Life statement, recording in the House Journal that his vote “was based on convictions beyond mere policy or principle” and that he “cannot in good faith dictate to another individual how they should cope with such a scenario.”  That is the whole purpose of being a legislator—to make policy dictating what other people should do in all kinds of scenarios.

But beyond such blatant anti-Life votes taken on record, Bailes felt obligated to take an additional, deliberate effort to register in the House Journal his opposition to amendments not debated on the House floor.  Bailes is one of the few Republicans to go out of his way to record his opposition to six different Pro-Life amendments to the state budget.

And now he wants to strike his public positions from the record.

While amending the record in the official House Journal is legal and allowed under House rules, the tactic is used by legislators trying to hide their misdeeds in Austin from voters.  Currently, Bailes is facing increasing pressure from the grassroots and his voters while running for re-election.  Emily Kebodeaux Cook, Esq., a lifelong resident of Liberty County and leading Pro-Life activist and lawyer, is running against Ernest Bailes in the March 2018 Republican Primary Election because of his failure to represent the Pro-Life values and priorities of Cook’s home district, House District 18.

Bailes’s constituents deserve an explanation of his duplicitous attempts to change his recorded stances. Recording statements in the House Journal and then striking these statements indicates unstable principles and a willingness to say and do whatever is necessary to maintain power.  The constituents of HD 18 merit a legislator who will truly represent their values and will fulfill campaign promises to actively take stances for Life.