During Konni Burton’s past two legislative sessions as state senator for Senate District 10, she has scored 100% on the Pro-Life Scorecard.  She is a vocal and committed advocate for Life in the Capitol. But before she ever cast a vote to protect preborn babies from her position in Austin, Konni was living out her Pro-Life convictions in one of the most tangible and sacrificial ways–as an adoptive mother.

The first television advertisement Konni released this General Election cycle focuses on her proud role as an adoptive mother.  She and her husband, Phil, volunteered at the Gladney Center for Adoption in Fort Worth, Texas, and Konni served on their Auxiliary Board.  The Burtons adopted two girls from the Gladney Center, first Tori and, a few years later, Faith.  Konni commented on the video that “no one needs a strong voice more than children in our community.  As an adoptive mom, I know that strong families make strong communities, and that strong communities make a strong state.  I want to share that message in this campaign!”

Democrats often accuse Republicans of only being pro-birth, in that Republicans abandon their Pro-Life principles once a child is born.  Konni Burton’s life illustrates that this is NOT the case. The fact that this issue is the one she chose to emphasize in her first television ad speaks to how important adoption is to her.  She wants every child to have a loving home and supports making adoption easier for families. Konni experiences the joy of motherhood because of the gift of Life given to both of the Burtons’ daughters.  Her consistent votes for Life in the Capitol are accentuated by the real-life way she has followed through in living out her Pro-Life values.

Early voting is October 22-November 2, and Election Day is November 6.  Don’t miss your chance to send a principled Pro-Life woman who not only talks about but also truly lives her beliefs back to the Texas State Senate.  Vote Pro-Life for Konni Burton! 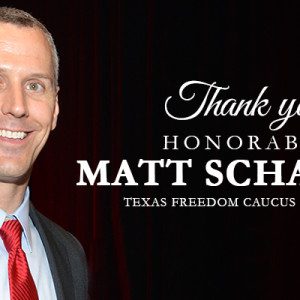 A Pro-Life champion versus an abortion advocate

After defeating his primary challenger, State Representative Matt Schaefer (R-Tyler) faces another challenge from the...