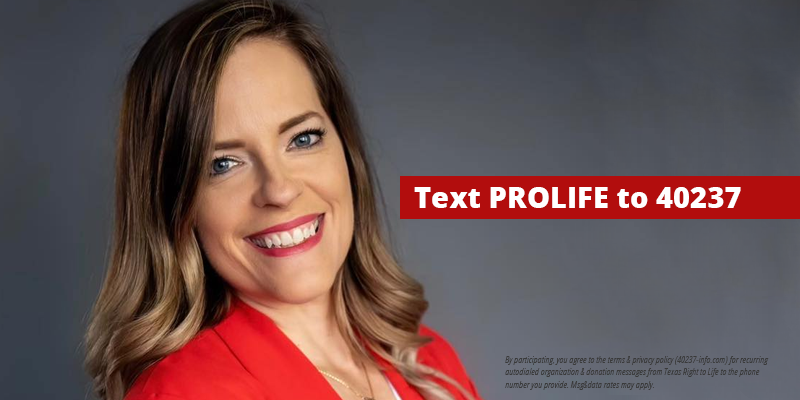 Michelle Evans is running for House District 136 (HD 136) to oust rabidly anti-Life Democrat incumbent John Bucy III. As an abortion radical, Bucy has touted the radical Democratic line by voting against Pro-Life policies every chance he gets, earning 0% on the Pro-Life Scorecard during both his terms in office.

Evans has a shot to replace his seat with a bold Pro-Life voice for the preborn and vulnerable. But she needs your help to make it to the Capitol!

Michelle Evans will not only stand up to defend preborn Texans, but she is also a strong advocate for vulnerable Texans with special needs.

Evans first began her political involvement by fighting for the rights of her own child who has rare genetic disorders. When she saw that Texas was failing medically vulnerable populations, Evans organized and went straight to the Texas Capitol to stop dangerous legislation that would further erode the rights of Texans with special needs. Evans has been living out her convictions by working for those our society very often overlooks. Now, she is ready to stop her opponent’s anti-Life antics and be a voice for Life in HD 136.

Evans’ Democratic opponent is not only anti-Life; his votes prove him to be radically pro-abortion. If it were up to him, Texas would be using tax dollars to fund abortion up to the moment of birth. In his two-session tenure, he voted against every piece of Pro-Life legislation that crossed his path, including the Texas Heartbeat Act and bans on taxpayer funding of abortion.

Though he pretends to stand for women, his true colors showed multiple times when he voted against funding to help women and families through the Alternatives to Abortion program. This program reimburses adoption agencies, maternity homes, and pregnancy resource centers for the supplies they provide expectant and new mothers so that they have the resources and confidence to choose Life.

A quick scroll through Bucy’s Twitter shows the tragic state of his anti-Life convictions.

On the day Roe v. Wade was reversed, Bucy wrote:

In overturning #RoeVsWade, SCOTUS flies in the face of 50 years of precedent and common sense. Abortion is and will continue to be necessary healthcare. And Americans should be able to make decisions about their lives and their bodies without undue government interference.

Bucy and his Democratic colleagues blindly refuse to acknowledge the scientific reality that every abortion destroys a preborn child’s life. Legal abortion is the legal killing of innocent human babies.

Bucy is so delusional in his abortion position that he even regularly attacks Michelle Evans and Governor Abbott for their Pro-Life positions. On Twitter he posted:

They’re both too extreme for Texas.

Despite his efforts to promote the killing of babies, Texas law currently protects all preborn children from abortion, starting at fertilization. The only exception is for instances where the life of the mother is in danger. But Bucy is still intent on seeing Texas Pro-Life laws weakened and rendered ineffective.

As Pro-Life Texans, we must redouble our efforts to defend Life. We must elect leaders who will promote a fully Pro-Life state, in which women and families are supported, encouraged, and offered resources to confidently and successfully choose Life. Despite their lies and propaganda, the radically anti-Life left only manipulates and pressures women into abortion.

Texas needs representatives who will be a voice for the voiceless and protect the vulnerable from fertilization (conception) to natural death. Bucy stands squarely against the Pro-Life values of Texans. Michelle Evans is a proven Pro-Life advocate who is not afraid to boldly stand for Life.

You can view the Pro-Life Voter Guide here.