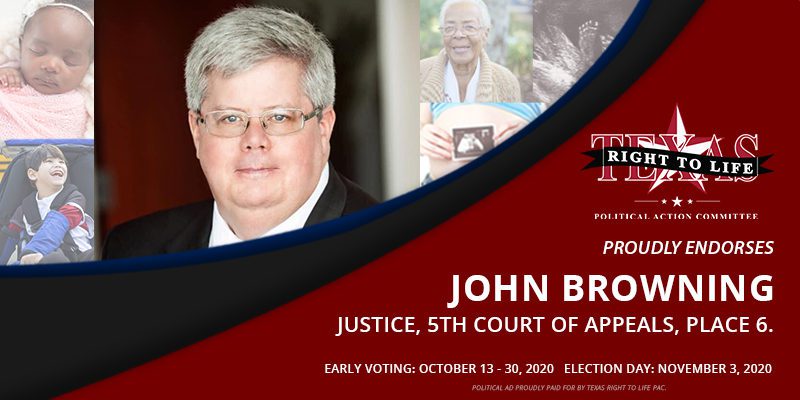 Justice David Bridges’ tragic death shocked the state last month. Tomorrow, Saturday, August 15, precinct chairs across the Fifth Court of Appeals will have the solemn duty of selecting the Republican nominee to replace him. With the judiciary under attack by activist judges on the Left, we need an experienced and astute judge ready to fulfill Justice Bridges’s role from day one. That is why Texas Right to Life is proudly endorsing John Browning for Justice, Place 6 on the Fifth Court of Appeals.

John Browning’s experience in law is unsurpassed. He has practiced law in the civil and appellate realms for 31 years, written four law books and innumerable law review articles, and served as an adjunct professor for law schools at Texas Tech, Texas A&M, and SMU. As a student and teacher of the law, John is undoubtedly prepared for any legal question that may come before him on the Court.

While John Browning is qualified, he is also a qualified conservative. When he ran for Place 11 on the Fifth Court of Appeals in 2018, conservatives lined up to endorse him. That is because John is committed to the Constitution and the rule of law. John has a deep appreciation for our nation’s founding principles as enshrined in the Constitution and rule as the law compels. John understands abortion is nothing more than a judicial fabrication of the radical legal Left. No such “right” exists in the Constitution. Activist judges are attempting to rewrite our nation’s law and customs from the bench and enshrine pro-abortion politics deeper into judicial thinking. John will stand athwart these attempts and defend what makes America and Texas great.

The single question confronting precinct chairs when they vote tomorrow is which candidate is more likely to promote the constitutional order and conservative principles from the bench. John Browning’s rich history as a conservative lawyer leaves no room for questioning his principles. He is also the best candidate for the general election, as he has name ID in all six counties covered by the Fifth Circuit. The Beto wave will not exist this November. And voters now understand who he is and the principles for which he stands. He is the most likely to win and is certain to promote conservative legal theory from the bench.

Everywhere across our nation and state, preborn children are under attack, not just by legislatures but also by extremist judges. Holding Justice David Bridges’s seat is absolutely critical for the Right to Life and the Texas and U.S. Constitutions. Precinct chairs, please join Texas Right to Life in supporting John Browning.