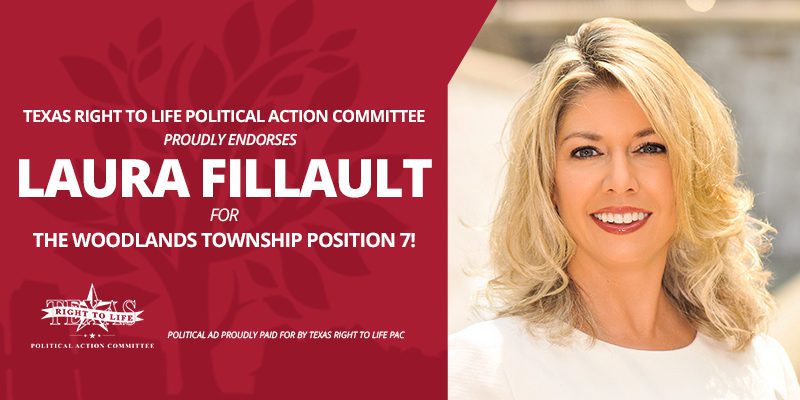 Early voting has already begun!  There is only one contested race on the ballot in The Woodlands – The Woodlands Township Board of Directors Position #7.  Texas Right to Life PAC has endorsed the only Pro-Life candidate in that race, Laura Fillault.

The Democrats’ playbook is to elect officials in nonpartisan, local races, and this race is the embodiment of that plan.  Carol Stromatt is an anti-Life liberal Democrat seeking to capitalize on low turnout in order to unseat Pro-Life conservative warrior Laura Fillault.  Stromatt has donated to and supported Wendy Davis, Hillary Clinton, and Annie’s List, a political action committee with the specific purpose to recruit, endorse, and help elect women to public office in Texas who believe in abortion on-demand.

Turnout will decide the winner of this race.  Republicans cannot be complacent; they must come to the polls and vote for the Pro-Life candidate in elections at every level of government.  Early voting runs now through November 3, and Election Day is November 7.

Vote now for Laura Fillault for The Woodlands Township Position #7!