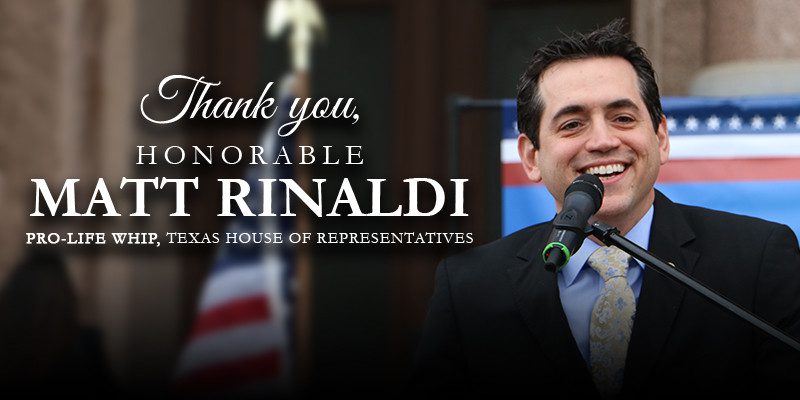 With the elevation of Bryan Hughes (R-Mineola) to the Texas Senate, long recognized as the Pro-Life Whip in the Texas House, the position for floor leader on Pro-Life policy was open.

During the 84th Session of the Texas Legislature, freshman legislator Matt Rinaldi (R-Irving) took an active role in using his brilliant legal mind and persuasion skills to help Texas Right to Life achieve life-saving policy victories by amending weaker bills.  Thus, Representative Rinaldi’s strength, dedication, and willingness made him the prime candidate to lead his colleagues on Pro-Life issues.  Representative Rinaldi’s district lies in Dallas County, encompassing the areas of Coppell and Irving.

The responsibility of a Whip is to spearhead policy efforts and ensure all Pro-Life members are aware of important votes and positions.

Behind the scenes, Representative Rinaldi tirelessly worked to fix troublesome language on other members’ bills dealing with Pro-Life legislation, as well as spearheading amendment strategies used as leverage when House management was trying to kill Pro-Life policies.

Whom one hires as part of his team is always a reflection on the member himself.  Representative Rinaldi’s entire office staff, and his wife Corley, are committed to advancing the cause of Life at every opportunity, and are always a reliable source of assistance to Texas Right to Life.

Pro-Life voters in House District 115 should be proud that their state representative is such an important leader in the Texas House of Representatives.