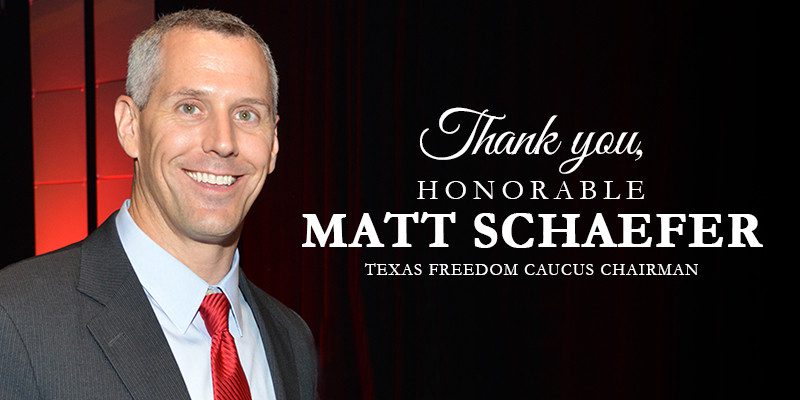 For the entirety of the legislative session, House management intentionally delayed bills promised to conservative voters during the Republican primaries.  Needed Pro-Life policies were delayed; privacy in women’s bathrooms was killed.  Strong enforcement provisions in the sanctuary cities legislation were among just a few of important issues the Texas Freedom Caucus had to fight House management tooth and nail for during the last 140 days.

As regular stand-alone bills were being killed, Representative Schaefer and his Capitol staff worked tirelessly on forming Pro-Life amendments and cultivating floor strategy with other members on germane bills.  Representative Schaefer’s leadership on a wide range of issues can be attributed directly to several key victories by the Freedom Caucus, including negotiating a deal to ensure no state taxpayer funds go to affiliates of abortion facilities within Texas.

Dana Hodges, State Director of Concerned Women for America of Texas, had this to say about Representative Schaefer’s work during the most recent legislative session,

“I am so proud of the Texas Freedom Caucus, led by Representative Matt Schaefer, for skillfully seizing the opportunity to kill so many bad bills.  It was so encouraging as a grassroots activist to see the Caucus being our voice on the House floor.”

“Representative Schaefer has led the charge on common sense policies often ignored by the Republican establishment, such as requiring parents receive notice before their children may be exposed to explicit materials in the public schools.”

“Session after session, we push to pass conservative reform legislation – common-sense, life-saving, liberty-preserving legislation found in the Texas GOP platform, and the bills are killed in House Committees by a cadre of big government Republicans.  In today’s world of politicians who would sell out their grandmothers to stay in power, we need fighters who will unflinchingly stand to kill bad bills and who will boldly contend for truth and the values that made this country great.  We are enormously proud of Representative Matt Schaefer’s leadership of the Freedom Caucus and his success in making the sanctuary cities bill a strong, enforceable rule-of-law bill.  Matt is a man of deep conviction and personal courage, a rare breed – a man who will never allow the political ruling class to shape and mold him into whatever they need for the sake of political expediency.  Without reservation, we’re going to stand with Representative Matt Schaefer because Matt fights for everything we hold dear.”

The undersigned leaders of statewide conservative organizations laud and thank Representative Schaefer for leading the movement one step closer to achieving a truly conservative, Pro-Life Texas House of Representatives.