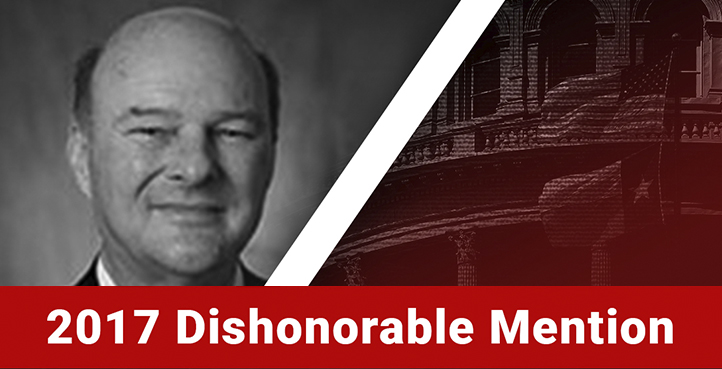 On February 19, John Raney sent an email to Brazos County Republican voters, featuring a letter from a fake Pro-Life organization in a desperate attempt to distort Raney’s dismal record on protecting Life as a Texas State Representative.  The letter attempts to justify a particularly egregious vote Raney took during the 2017 85th Session of the Legislature by minimizing the importance of the vote and presenting a false narrative.

The vote referenced in the letter was a vote “to table” (which means to lay aside on the table or to kill) Amendment 22 to Senate Bill 8 (Regular Session of the 85th Legislature).  Pro-Life Representative Matt Schaefer authored this amendment in order to close the loophole in Texas law that fails to protect unborn children with a disability from abortions after 20 weeks.  22 liberal Republicans defected from the rest of the Republican caucus to join the anti-Life Democrats in killing this amendment, keeping in law the discriminatory practice of late-term abortions for children with disabilities.  Had those 22 Republicans voted Pro-Life for the amendment, the amendment would have passed into law.  This betrayal caused an uproar in the Pro-Life community, and the vote on the Schaefer Amendment has been key to dividing sheep from goats, in separating true Pro-Life elected officials from those who use Pro-Life rhetoric for campaigns and political power.

The letter in Raney’s email from the fake Pro-Life organization claims that the Schaefer Amendment only applied to babies with severe fetal abnormalities who “cannot live outside the womb even with the best medical attention… [these babies] will die before birth or shortly after birth.”

This claim is false.  Below is the complete text of the Schaefer amendment (emphasis added):

Even so, if these babies are really going to die, what is the rush in euthanizing them in the womb?  There is no certainty whatsoever that such ill babies will actually die in utero, or that the diagnosis is without error.  If a child is so ill or disabled, would that be a perfect opportunity to err on the side of Life and help the parents through the tragedy of such a heartbreaking loss?  Why rush to kill the child and compound the tragedy?

The language of the Schaefer Amendment was drafted to include all fetal abnormalities specifically because babies with all sorts of disabilities, not just “severe,” are victimized by abortion in Texas.

The letter references House Bill 2, the Pro-Life Omnibus Bill from 2013 that banned abortions after 20 weeks, a policy for which Wendy Davis became famous for filibustering.  (Ironically, the fake Pro-Life group praises Raney for his vote in favor of this bill in the letter, yet in 2013, this same group did not support the bill).  HB 2 banned late abortions on all babies except for those with a “severe fetal abnormality,” which the 2015 and 2017 Schaefer Amendments attempted to address.

There are three main problems with the anti-Life loophole Raney voted to keep into Law:

Aside from minimizing the importance of the Schaefer Amendment, the letter claims that if the amendment had passed, the courts would have struck the Pro-Life protection down.  This excuse is absurd for several reasons:

The fake Pro-Life groups raise funds from moderate Republican incumbents to whom the groups give cover during elections.  Texas Right to Life will not endorse incumbents or candidates who do not share our values and our views that all unborn children, including those with disabilities, must be protected from the barbaric practice of abortion; for abiding by our mission, we draw criticism from the liberal branch of the Establishment Austin lobby, but we enjoy statewide support from our members for staying focused on our mission.

On the other hand, the other groups are funded by liberal members of House leadership as a means of protecting the Establishment elite politicians during their reelection challenges.  During each session of the Legislature, these local organizations push a slew of weak and toothless Pro-Life bills as cover for their opposition to meaningful Pro-Life reforms, testifying and offering warped legal analysis about actual life-saving bills—including the prohibition on abortions after 20-weeks in 2013.  These groups are now praising that 20-week ban that they once protested.  In this election cycle, 19 of the 22 Republicans who voted to kill the Schaefer Amendment are running for re-election with the endorsement of the fake groups.

Apart from voting to table the Schaefer amendment, Raney has developed a reputation for unexcused absences on key Pro-Life votes.  These are not absences due to bathroom breaks or illnesses or lunch; all of those would be excused.  Members of the Texas House who prioritize the protection of Life do NOT miss Pro-Life votes and ensure that they are present and on record protecting Life.

Texas Right to Life urges you to look past the propaganda promoted by the liberal, Austin Establishment, trying desperately to deceive you in order to preserve their power.  Visit www.TexasRightToLife.com and do your own research.

House District 14 deserves much better than John Raney, who misses Pro-Life votes, then votes for power over principle when he is there.  Sarah Laningham is a Pro-Life activist and small business owner who will not forget her principles once she arrives in Austin.  Please send Sarah Laningham to Austin on the March 6th election.  All unborn children, especially those with disabilities, are counting on you.