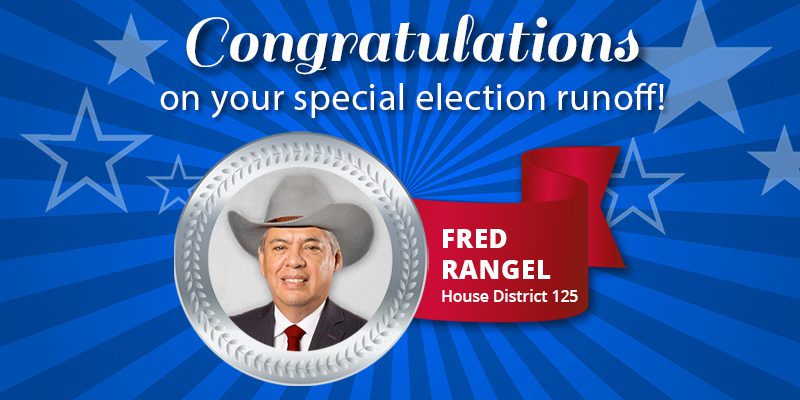 Texas Right to Life, the oldest and largest statewide Pro-Life organization in Texas, celebrated Fred Rangel’s advancement to the runoff in the February 12 special election for Texas House District 125.  Rangel won a commanding 37.96% of the vote, nearly doubling that of his runoff-bound Democrat opponent.

“Contrary to the narrative in the media, this election clearly shows that voters are fed up with the anti-Life policies of Democrats and are looking for positive change,” Elizabeth Graham, Director of Texas Right to Life, said.  “We are ecstatic about Fred Rangel’s advancement to the runoff and look forward to a Pro-Life victory on Election Day.”

The residents of House District 125 have been represented by anti-Life Democrats for too long.  The most recent occupant of the seat, Justin Rodriguez, consistently scored a 0% on the Pro-Life Scorecard during his tenure in the Texas House, ranking him among the most radical of pro-abortion Democrats with over a dozen votes in favor of late-term abortions.  Rodriguez voted countless times to keep taxpayer dollars flowing to abortion providers, and worse, Rodriguez also voted in favor of late-term abortions by opposing the ban on abortion at five months after fertilization.

This election also shows that even Democrat voters are fed up with the radical candidates being pushed upon them from the top of the party.  Democrats rejected the Alexandria Ocasio-Cortez-style candidate endorsed by Wendy Davis and pro-abortion groups Annie’s List and Emily’s List.