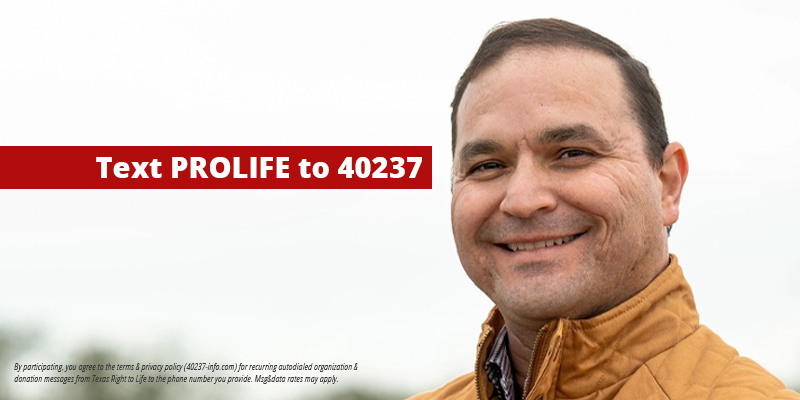 This is a crucial moment for the Pro-Life movement in Texas.

Since the end of Roe v. Wade, Texas law now protects all babies from abortion, starting at fertilization. Yet, the fight for Life is far from over. The abortion industry and anti-Life left are bent on destroying every single advance we’ve made for the defense of Life.

The left is more determined than ever to use the November election to resume the killing of innocent babies. We have to stop them!

This November we MUST elect strong Pro-Life candidates to office. Pro-Life South Texans should vote for Adam Hinojosa, who will not bend but will defend Life.

Adam Hinojosa is the strong Pro-Life candidate running for Texas Senate District 27 (SD 27) in South Texas. SD 27 is an open seat, recently vacated by retiring Democrat Eddie Lucio, Jr. Senator Lucio was one of the rare Democrats who courageously fought to protect the preborn despite the increasingly radical abortion views of his party. For over 30 years, the people of SD 27 kept Lucio as a solid Pro-Life voice in office.

Now, Hinojosa’s Democratic opponent, Morgan LaMantia, is trying to seize the opportunity as a chance to add an anti-Life, abortion vote to the Texas Senate.

She is a supporter of abortion—but you might not know that, since she is not very vocal about it on her website and social media accounts. LaMantia knows that South Texas is very Pro-Life, so radical pro-abortion messaging would only be harmful to her campaign.

In a livestream with Planned Parenthood, LaMantia said that she “[does] not agree with Senator Lucio’s position on LGBTQ+ rights or on SB 8 [the Texas Heartbeat Act]” and that “when it comes to SB 8… that is a line I draw in the sand. That is a line that we can’t cross, because we have to fight for those rights.”

Even though former Senator Lucio’s Pro-Life views are very popular in SD 27, LaMantia has distanced herself from Senator Lucio and his Pro-Life efforts, just to appease her radical Democratic party. LaMantia is trying to sneak her radically anti-Life values past the Pro-Life people of South Texas.

While she remains largely silent on abortion leading up to the election, she is sure to be a consistent anti-Life vote along with her fellow Democrats seeking to unravel Texas’ Pro-Life victories.

In stark contrast, Adam Hinojosa is unshakably Pro-Life. In the Texas Senate, he will always vote to protect Life. He is passionate about protecting vulnerable preborn children from abortion. Hinojosa stated that he is running for the Texas Senate “to continue our pro-life legacy.” He will never back down from the fight for Life.

Stand for Life by voting for Adam Hinojosa on November 8!Early voting is October 24 – November 4, and Election Day is November 8. Find the Pro-Life Voter guide here!