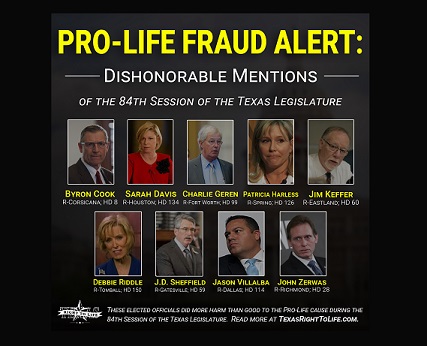 The race in House District 150 could be historic. Yes, every election is historic, but increasingly, every election shapes the next decade of the state and the country. The policymakers matter—your vote, every vote matters.

Debbie Riddle has held the House seat in HD 150 for 14 long years, and in that time, her once strong Pro-Life values have waned to dangerous lows. In fact, her perplexing activism against Life over the last four years has given her a well-earned spot on our Dishonorable Mentions List.

Riddle flip-flopped on Life, embraced the Establishment, and she’s not looking back.

In 2013, Riddle supported a bill to expand the authority of doctors and hospitals over the lives of disabled patients, similar to the situation in which death was imposed on Chris Dunn by a hospital committee late last year. Texas laws already endanger hospitalized patients; why does Riddle further jeopardize their recovery, care, and well-being?

In 2015, Riddle peddled a sham bill, HB416, masquerading as a Pro-Life effort to protect women who are victims of human trafficking and who are victims of coerced abortion. Only 5 Democrats in the State House will vote Pro-Life with the other 47 Democrats vehemently opposing Pro-Life bills—AND YET EVERY Democrat voted for this allegedly Pro-Life HB 416.

HB 416 included no oversight, no penalties, no compliance rules and certainly no safeguards for victims of rape, sexual assault, human trafficking, or coerced abortion. A “Pro-Life” bill even Planned Parenthood could love. When other House members tried to amend solid enforcement language into Riddle’s HB 416, she rejected the language that would have protected women from coerced abortion.

Debbie Riddle has spent so long in Austin that she’s part of the Establishment-Insider-Moderate-Ruling Class who’ve prioritized power over principle.

Voters in Tomball and Spring have a better choice in Valoree Swanson, long-time conservative activist, and unapologetic defender of the unborn. Valoree does not need this job to validate her life; in fact, we asked Valoree to prayerfully consider challenging the wayward incumbent.

When Valoree agreed to run, throngs of people rushed to support her because they know Valoree to be strong and unwavering and committed to the core values of the majority of Texans.

Political gamesmanship is no joke when the lives of real people hang in the balance.

Valoree Swanson will stand with the people of her district to protect freedom and Life in Texas.