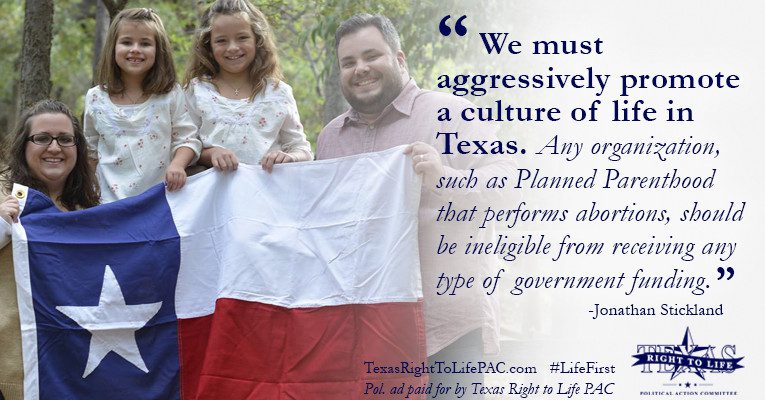 On Super Tuesday, there’s more at stake than choosing the GOP presidential nominee.

The Austin elite wants grassroots Texans silenced so that voters can’t scrutinize their shoddy records. But we did tell you their records, and now we’re demanding leaders of good character instead of opportunistic politicians.

The integrity of our state depends on the election of real conservatives who will champion Pro-Life values at the state and local levels.

In House District 92, Jonathan Stickland has proven allegiance to the Pro-Life majority. Jonathan shares our no-holds-barred approach to upholding Pro-Life values and challenging Texas Republicans In Name Only (RINOs). In 2015, Representative Stickland proved that he and his constituents will NOT be silenced by RINO bullies.

Jonathan Stickland is the number one target, and House leadership would like nothing more than to see him defeated. We can’t let that happen.

Texas Right to Life, Empower Texans, Conservative Republicans of Texas, Texas Values, the Texas Home School Coalition, and the leaders of Eagle Forum and Concerned Women for America agree: Stickland is Pro-Life and the standard for conservative legislators.