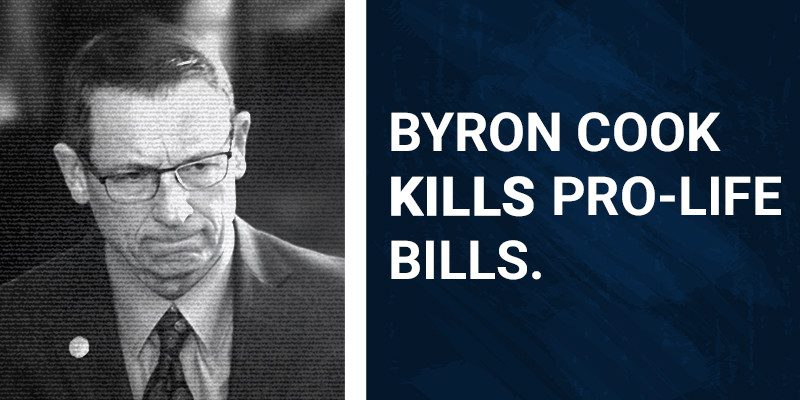 With just over 30 days left in the 85th Session of the Texas Legislature, the Pro-Life movement in Texas must come to grips with a brutal reality: Byron Cook (R-Corsicana) is intentionally stalling two major Pro-Life protections in the House Committee on State Affairs.  After months of Pro-Lifers exercising the patience of Job for the legislative process to work, Cook’s malfeasance has killed the top Pro-Life Legislative Priority: the Dismemberment Abortion Ban (SB 415 and HB 844).

House Bill 844, the Dismemberment Abortion Ban, would prohibit a barbaric procedure by which an innocent unborn baby’s life is taken by her body being ripped limb from limb.  HB 844 has been in the House Committee on State Affairs, chaired by Cook, since mid-February, yet he refuses the opportunity for other committee members to hear the merits of the bill.  The full Senate has already passed this imperative life-saving legislation.  In fact, 62 other members of the Texas House of Representatives have signed onto the legislation as co-authors.  The Texas Attorney General, Honorable Ken Paxton, has officially supported the measure by aiding Alabama in defense of similar legislation.  Furthermore, at the 2016 Republican Party of Texas Convention, 95% of voting delegates (which is more than 8,000 Republican grassroots activists) voted in favor of banning dismemberment abortions – receiving more votes than any other Pro-Life policy recommendation.  However, SB 415/HB 844 is singlehandedly being killed by Cook.

Byron Cook is also killing the Pro-Life Health Insurance Reform bill in the House Committee on State Affairs.  Authored by a senior member of that committee, Chairman John Smithee (R-Amarillo), House Bill 1113 would ensure your tax and premium dollars are not subsidizing the abortions of other people.  Again, the Senate has already passed this common-sense legislation that 25 other states have already passed, but Cook has failed to even schedule a committee hearing.

Instead of helping pass Pro-Life laws that actually reduce the number of abortions in Texas, undermine Roe v. Wade, and focus the cultural conversation on the humanity of the unborn (three necessary principles that guide Texas Right to Life’s policy stances), Byron Cook is prioritizing weak legislation for political cover during re-election efforts, ignoring substantial Pro-Life policies that would actually save innocent lives.

Time is running low.  After the failure of Byron Cook to move these life-saving bills, the clock on the 85th Session of the Texas Legislature is about to expire.  In fact, Cook has effectively already killed these and many other bills due to the timeline of the Texas House of Representatives.

Thankfully, some Pro-Life champions in the Texas House of Representatives remember the imperative they received from the grassroots and the Republican Party platform to pass life-saving (not politician-saving) legislation.  Several House members are committed to fighting for real Pro-Life victories on the House floor at any cost, i.e., amending other bills with Pro-Life policies.  With only 30 days left in the session, the Pro-Life movement cannot yet quit.

Tell your state representative to support floor efforts to pass life-saving Pro-Life policies by any means possible.  Failure to take a stand at this critical juncture equates to supporting the obstructionist governance of House leaders like Byron Cook.

Silence is complicity and will result in the deaths of thousands of innocent Texans.