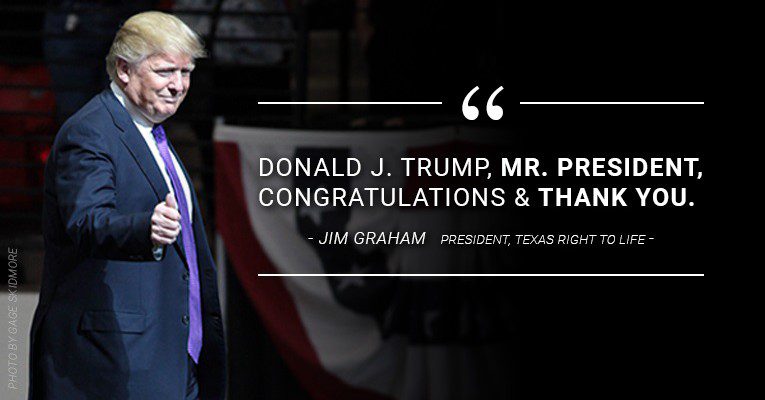 Home » News » From the President: Thank you, Donald Trump

Standing a few feet away from Donald Trump at 3:00 in the morning at the campaign headquarters in New York City, I knew I was at the epicenter of a monumental, historic event.

Minutes earlier, Hillary Clinton had conceded the acrimonious race for the presidency of the United States, and Trump stood before us, our nation, and the world as president-elect to accept the victory and project his vision for bringing our nation together to begin striving toward the goals on which he campaigned.

While the substance, style, and tone of Trump’s early-morning address was perfect, the victory alone is what will be studied for years.

In a herculean campaign, Trump accomplished multiple achievements, any one of which a seasoned politician would be proud to lay claim as the pinnacle of his or her career.

First and foremost, Trump ended the career of a truly evil force- Hillary Clinton.  Clinton, like her husband, is not simply a good person who occasionally does bad things.  Hillary is an evil person who constantly works against the laws of God and nature.  Period.  The argument that this election was a difference of degrees—a choice of the lesser evil—was specious if not intentionally deceitful.  Trump, like all of us, may occasionally do stupid or even bad things, i.e., sin.  However, Clinton is determined and calculated when advancing her plans for death and destruction.

In the coming months, the nefarious, abominable deeds that have been perpetrated by both Clintons and their cabal across the globe will be revealed.  Many of their coterie could and should go to federal prisons for the rest of their lives.

That Hillary and her worldwide legion were stopped is truly the miraculous act of a merciful God.

Second, Trump defeated a political army that was superior organizationally and financially.  While Trump was a stronger candidate than Clinton and the technology and communication tactics employed may have been equal—or even slightly better for Team Trump, the Clinton team and the ancillary support PACs, organizations, and individuals (Warren Buffett, George Soros, et al.) were far better organized, staffed, and funded (legally and illegally).  However, adhering to Sun Tzu’s Art of War, Trump negated the enemy’s superiority by picking battlefields where he could win based on his timing, armaments, and limitations.  He picked key states and delivered a unique message targeted to the demographic he needed to reach using a rifle, not a shot gun.  This campaign will be studied as an example of a smaller, more nimble army defeating a larger, cumbersome force that could not adjust to the terrain on which they were forced to fight.

Third, Trump, with tremendous help from Julian Assange and his WikiLeaks, fully exposed the sycophantic mainstream media as being part and parcel of the Democratic Party.  From debate questions being delivered beforehand to Donna Bazile, Democratic Nation Committee Chair, to reporters pre-clearing their stories with the Clinton campaign, the average American was finally presented incontrovertible evidence that Big Media is not independent and serves at the pleasure of the liberal wing of the party of the jackass.  The fact that anyone seeking hard facts must now turn to WikiLeaks, Alex Jones’ InfoWars, the London press, or even the hackers of Anonymous is a deplorable indictment of the prostitutes who wear press passes around their necks with the same religious fervor that a Christian wears a cross.

Fourth, the corruption than runs rampant in the FBI, DHS, IRS, DOJ, and probably every other federal agency is naked for anyone with eyes to see.  James Comey clearing in approximately 750,000 seconds 650,000 discovered emails (many of which will prove to be highly classified documents) on an unsecure laptop shared by a sexual deviant and his mysterious wife, who has complete access to Hillary and all our state secrets, days before the most important presidential election since 1840 is criminal and patently obvious.

The Smiths and the Jones now understand that there are two codes of justice: one for the typical citizen and one for a member of the establishment.  The FBI and other federal agencies are either incompetent or complicit in the cover up of crimes of the establishment.  Trump understood the egregious nature of the innumerable crimes committed by the untouchables.  He tapped into the righteous indignation of those voters in flyover country—many of them had not voted Republican or at all in years, and they voted in droves to win states (i.e., Michigan and Wisconsin) that have not been won by a Republican in a generation or longer.

The Republican Party has become almost entirely centered on raw power, the power of those they have deemed worthy, and cares little for principle.  The platform is a document to be drafted by activists and put on a shelf by politicians to never be studied and certainly not viewed as a set of legislative goals.  Trump was never embraced by the Republican establishment nor aided despite that he had won their game by their rules.  These Republicans thought we could survive four or eight more years of liberal Democrat rule and 2-4 Supreme Court appointments, even though our nation is critically bleeding now.  Then we could be given another one of their selections: a Nixon, Ford, Dole, Bush, McCain, or Romney.

As some savvy Republicans have discovered how to win elections by circumventing the mainstream media with alternative media and social communication platforms, Trump has shown a path for Republicans to win without the aid of the Party, which will cause many to ask what role, if any, does the Party play in the post-modern communication age.

Trump has now emerged by breaking assumptions, conventions, and the self-perpetuating elitist agenda.  He has shown a new way to message, organize, and win.  His next goal will be to appoint multiple strict constitutional constructionists to the Supreme Court and other federal benches and demand the passage of a solid, conservative Pro-Life agenda, which the Republican Party has largely failed to do for a generation.

I believe this is Trump’s intention and that he will prove to be just the man, finally, up for the job.