Erin Zwiener is a one-term far-left state representative from San Marcos. She’s amassed a shameful anti-Life voting record. And she recently demanded that abortionists continue killing children during the COVID-19 crisis, even when doing so means less personal protective equipment for brave doctors and nurses trying to keep COVID-19 patients alive in hospitals. 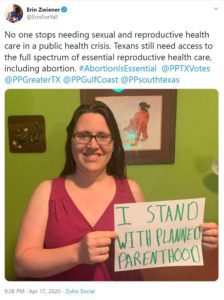 Most Texans cannot fathom Zwiener’s disregard for human Life, but her previous writings reveal even more. “I wouldn’t have minded if Ebola or antibiotic-resistant plague or something had killed most of the people for me, but I wouldn’t have done it myself,” she wrote in 2014.

Zwiener’s blog reads like a work of weird, creative nonfiction from a woke college leftist, much like young Beto O’Rourke’s murder fantasy writings. Her disclaimer states that the events and people are fictitious, but even so, the thoughts are disturbing. 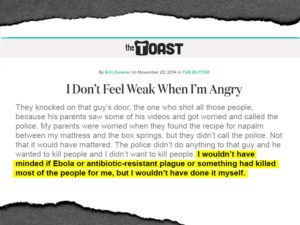 In the piece, Zwiener reflects on how her love for nature led her to hate people, as people were responsible for killing nature. Hatred, she claims, made her feel strong, like she was doing something good for the world. But “the problem with being a person who hates people,” Zwiener goes on to explain, “is that you hate yourself too, and you believe the world would be better off with you dead.” She then describes her time as a self-described “eco-terrorist,” when she attempted (and luckily failed) to burn down a half-built house in a new housing development because she worried about wildlife. “Being mad at yourself isn’t any fun and you feel guilty all the time, so I decided to be mad at someone else,” she explains. Creepily enough, she uses this action to try to relate to mass shooter Elliot Rodger and his hatred toward women which inspired him to commit such a heinous crime. (Although Rodger “was better at murder than [she]was at arson.”) She makes sure to distinguish her actions from Rodger’s (“He wanted to kill people and I didn’t want to kill people,” she clarifies), yet uses the motivation shared by both her and Rodger – hatred – as some sort of strange attempt to make the point that hatred can lead to good or bad outcomes. “I understand the need to show how upset you are with something physical and violent and permanent,” Zwiener writes. 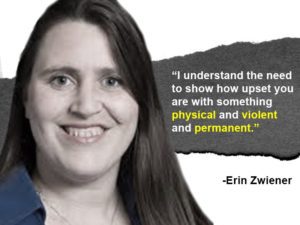 Although there is a small attempt to claim that she has left her hateful ways behind, hatred still permeates Zwiener’s writing. At one point, looking back on her formerly-hateful self, she claims that all the ideas she believed at the time, such as “humans are cancer and the earth is dying,” really aren’t that crazy. Regardless of whether Erin Zwiener still yearns to burn houses down, the mindset that inspired her (or her “fictional” self) toward that action is still there, now manifesting as policy votes rather than orange juice bottles filled with gasoline.

Those who followed Zwiener’s voting record during her first term in office aren’t surprised. In 2019, Zwiener received a 0% on the Pro-Life Scorecard. She voted against every Pro-Life measure and even co-authored anti-Life amendments to weaken Pro-Life bills. Zwiener didn’t even support a measure that would’ve required giving basic medical care to children who survive an attempted abortion. 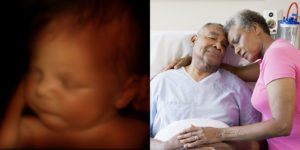 On top of Zwiener’s pro-abortion agenda, another vote Zwiener cast should trouble every Texan, especially now. Zwiener voted against a bipartisan amendment that subjected physicians to disciplinary measures if the physician does not make reasonable efforts to transfer a patient if they initiate the deadly 10-Day Rule. The 10-Day Rule allows hospitals to pull the plug on patients AGAINST their will or that of their medical power of attorney. Once the rule is invoked, patients and their families have just 10 days to find a transfer to another hospital. Texas Right to Life has been fighting to abolish this barbaric rule, which largely resembles the death panels in European socialist medical systems. The Pro-Life amendment provides a step in the right direction by requiring physicians to try to transfer rather than sit back and run out the clock. With her vote against this amendment, Zwiener made clear her utilitarian view on human Life.

This must be why, in the middle of a crisis with people’s lives at stake, Zwiener is voicing her desire that abortions continue to add to the death count. This must be why she votes against protecting vulnerable patients from death panels. As Zwiener writes: “I wouldn’t have minded if Ebola or antibiotic-resistant plague or something had killed most of the people for me, but I wouldn’t have done it myself.”

Erin Zwiener is too radical to represent the residents of House District 45. But in order to stop her, Carrie Isaac must first make it through her primary election runoff set for July 14th. Carrie Isaac is the principled, Pro-Life Republican in this race, and the only one who can beat Zwiener and turn our district red again. Be sure to vote for Carrie Isaac this summer, and bring all of your friends and family to the polls. You can visit Carrie’s website here.
Pol. ad. paid for by Texas Right to Life PAC