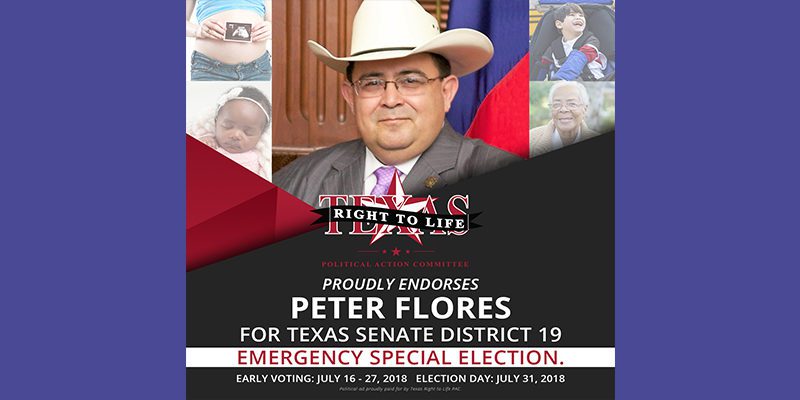 Now through July 31, Pro-Life voters in Senate District 19 have the opportunity to elect a true Pro-Life candidate to the Texas Senate: Peter Flores.

Senator Carlos Uresti, a radical pro-abortion Democrat who has been the Senator for SD 19 since 2006, was recently forced to resign after being convicted of several felonies.  He will serve a 12-year jail sentence. Governor Greg Abbott called an emergency special election to take place July 31 to fill this seat for the remaining two years of the term.

SD 19 has always been represented by Democrats, leaving Pro-Life Republicans yearning for better representation.  A little known secret is that SD 19 is not a deep blue one, being in fact a swing district. After more than a hundred years of Democrats owning this seat, now is our time to seize this opportunity!

Peter Flores has a long career in public service.  He served the state as the colonel game warden, directing the Texas Parks and Wildlife law enforcement division.  His law enforcement experience will serve him well in the capitol because he has a long history of testifying in Austin on behalf of law enforcement related bills. Peter Flores knows how Austin works, and will hit the ground running to deliver results for your district and the state.

The importance of winning this election cannot be overstated.  For the first time, voters in SD 19 have a real chance to send a true Pro-Life candidate to be their voice in Austin.  SD 19 has been held by pro-abortion radicals for too long, and the two main Democrats in the race – Pete Gallego and Roland Gutierrez – both believe in abortion on demand up until birth.  Peter Flores, on the other hand, will be an unwavering advocate for the defenseless. Peter proved his Pro-Life convictions in his own life. Now he wants to take those principles to advocate for you, and for every unborn and vulnerable Texan, in Austin.

Early voting runs from July 16 until Friday, July 27, with election day on July 31.  As Pro-Life voters, we must take advantage of this rare opportunity to change the Texas Senate for the better.  With our votes, we can save lives.

If you live in SD 19, make sure you go to the polls to vote for Peter Flores for your next state Senator.  Bring your friends and family members who care about protecting tiny Texans in the womb to vote for Peter as well.  With your help, we can overwhelm the Democrats and finally make SD 19 a Pro-Life district.