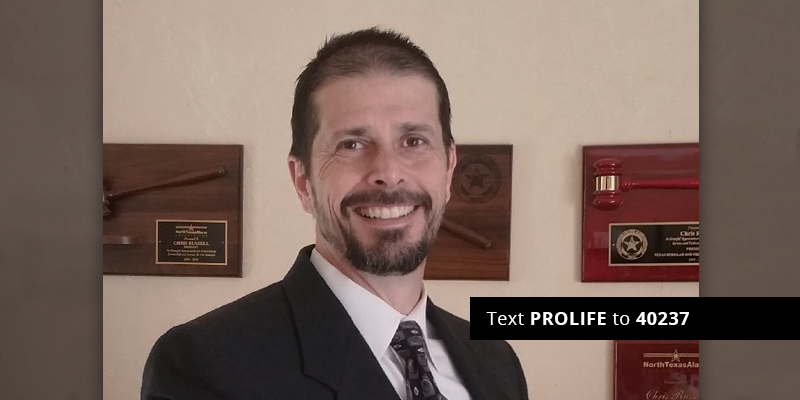 In just over a month, Texas will vote in the Primary Elections, deciding which candidate for each party will advance to the General Election in November (or a primary runoff). This year’s primaries are shaping up to be particularly interesting, between incumbents receiving primary challengers, redistricting, and many elected officials retiring or seeking higher office.

In every election, Pro-Life Texans must pay close attention to what the candidates are saying. Unfortunately, despite the fact that ending all elective abortion has long been a plank in the Republican Party of Texas Platform, not every Republican can be trusted to actually hold Pro-Life positions, let alone vote that way. One of these candidates is Chris Russell.

Russell is running against Tan Parker (currently a representative from the Dallas/Fort Worth area) in the Primary Election for Texas Senate District 12, a seat currently held by retiring Senator Jane Nelson. Texas Right to Life is extremely proud to support Tan Parker in this race. He earned the title of Pro-Life Hero this session thanks to his work carrying patients’ rights legislation and his 100% Pro-Life voting score. We are looking forward to what more he will be able to accomplish in the Senate.

So, what is his opponent like? Chris Russell labels himself as a “Texas businessman and entrepreneur”. His campaign website is sparse, leaving us little with which to ascertain his policy positions. He is a self-described “constitutional conservative”, as many Texas Republican politicians claim, but often their policy positions and voting records say otherwise. Russell is no different.

Russell showed his cards when he responded to a comment on an October 2021 post to his campaign’s Facebook page in which he opened himself up to questions from his potential future constituency. A few took him up on his offer. “Straight to the Issue,” one respondent began. “Where do you stand on women’s reproductive rights and Texas’ current legislation dealing with those rights?”

Russell’s response to the commenter was shocking, especially for a self-proclaimed conservative. “Individually I am pro-life and also a Constitutional Conservative.” At first glance, this isn’t too concerning. However, a bold Pro-Life stance should not begin with qualifiers. When people claim to be personally or individually Pro-Life followed by an explanation, usually they are actually saying they support legalizing abortion. So, in reality, this is usually a statement supporting legalized abortion.

Chris Russell continues, and gets worse. “With that said; an elected official should not be a dictator or pursue their personal beliefs above those of the people they represent. The Texas Heartbeat Bill is bad legislation created by career politicians. It is disingenuous to the Constitution and inherently divisive.”

He is correct that abortion is a divisive issue. Those who want to protect babies are on one side, and those who want to allow them to be killed are on the other. With his statements, Russell has placed himself squarely on the wrong side. Abortion is an unconstitutional atrocity, and laws like the Texas Heartbeat Act which seek to right our country’s wrongs and save lives are critical. The Texas Heartbeat Act has already spared more than 10,000 preborn children from abortion and is the strongest and boldest life-saving law to take effect since the Supreme Court of the United States wrongly decided Roe v. Wade in 1973. Russell’s erroneous condemnation of the Texas Heartbeat Act puts him directly at odds with the 100 Texas preborn children who are being protected from abortion under this law every single day.

Rather than coming off as pragmatic, his words reveal cowardice or apathy. When Texans elected the legislators who voted to pass the Texas Heartbeat Act, they did so hoping their representatives in Austin would use their power to end abortion. We need more courageous fighters in Austin, just as Tan Parker has repeatedly proved himself to be.

Banning all elective abortion is a goal of the Republican Party of Texas, a goal shared and advanced by the Republican voters who put elected officials in office to do just that. For someone who has such grievance with “career politicians,” Russell sure seems interested in maintaining the status quo.

If you live in Texas Senate District 12, vote for Tan Parker, a stalwart defender of preborn babies and vulnerable patients, rather than Chris Russell, an open opponent of life-saving legislation like the Texas Heartbeat Act. Early voting is February 14 – February 25, with Primary Election Day on March 1. Visit TexasRightToLifePAC.com for a full list of Texas Right to Life’s endorsements for the Primary Election.