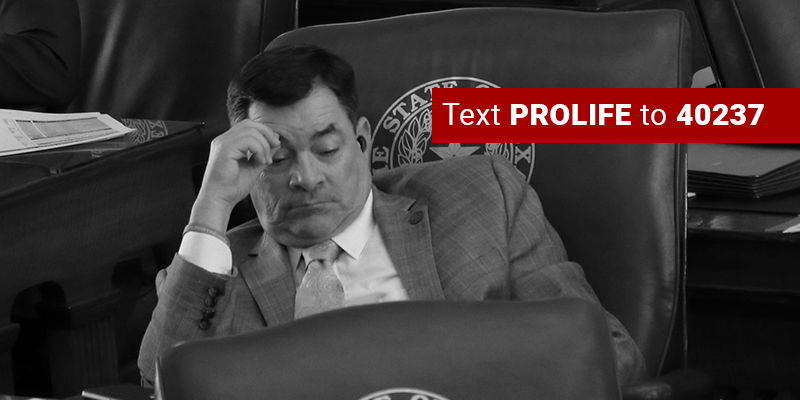 Voters like you deserve to know what your elected officials accomplish (and what they don’t) in the state Capitol in Austin. This is why we create the Pro-Life Scorecard, detailing every vote, every bill signed on to, every amendment, and every public statement that your lawmakers took for and against Life. One representative who has consistently received disgracefully low scores is Ken King (R-Canadian), who represents the Texas State House District 88 in the panhandle.

Ken King has a career average score of 68%, which is horribly low, especially for a Republican. However, he and a charading “Pro-Life” group deceitfully claim that he is 100% Pro-Life.

A radio station in King’s district took note of this, and invited Texas Right to Life’s Legislative Director Dr. John Seago to participate in a debate over King’s voting record. King declined to join the show. On the other side was Texas Alliance for Life (TAL), an organization which has endorsed King in every election cycle (even after he earned a 37% Pro-Life Score in 2019).

According to their executive director and their last scorecard released back in 2017, TAL claims that King has voted 100% Pro-Life since his first session in 2013. They supported their claim by touting King’s 87th Legislative session floor votes in favor of the Texas Heartbeat Act, the abortion trigger ban, funding the Alternatives to Abortion program, and the bill limiting chemical abortions.

However, floor votes are only the tip of the iceberg and one session does not tell the whole story of King’s five sessions in office. The full picture of a legislator’s true priorities is revealed in whether he seeks to weaken life-saving legislation before and after a bill gets to the floor. This is why Texas Right to Life includes co-authorship, committee votes, and amendments in our scorecards.

TAL claims that King’s record reveals the truth. Texas Right to Life agrees: King’s record shows that he has always been less than lackluster, to say the least, and his actions certainly haven’t lived up to his campaign promises of being 100% Pro-Life. Pro-Life voters should take a detailed look at Ken King’s record:

Ken King Failed to Sign on to Life-Saving Priority Legislation

During his career, King has consistently failed to sign on to critical Pro-Life priority legislation. Signing on to a bill  is a vital piece of the puzzle when determining if a legislator is truly Pro-Life, because co-authorship indicates that the lawmaker truly supported a bill throughout the long legislative process, not just when they were required to take a vote. Co-authoring a bill helps legislation gain momentum and get to a floor debate.

King’s failure to add his name to Pro-Life Priority legislation even after urged by Texas Right to Life reveals that he does not actually see unborn children and vulnerable patients as his priority. Some of these neglected priorities include the 2019 bill to outlaw late-term abortions on babies with disabilities, and bills in 2019 and 2021 that would stop hospitals from pulling the plug on patients against their will.

His record goes beyond failure to co-author. In 2017, the Texas House considered a bill that would require proper burial of fetal and embryonic remains. Pro-Life Champion Stephanie Klick authored Floor Amendment 2, which added a ban on dismemberment abortions to this bill. This was the only Pro-Life policy debated on the floor that year that actually stopped abortions and directly saved lives. Because of this amendment, Texas became the first state ever to enforce a Dismemberment Abortion Ban.

Although King was present for amendments 1 and 3, King was nowhere to be found when the vote was taken on the Dismemberment Abortion Ban. This amendment was a top priority, and Texas Right to Life ensured that every representative knew the vote was coming up through emailed Scorecard Alerts to them and their staff, leaving notices in their office, and passing out notices in the House lobby the morning the representatives walked in. As the official House Journal shows, King’s absence is without excuse, and seems instead like an attempt to avoid taking a bold stand on the issue.

In 2017, King actually voted to advance a Democrat-proposed amendment to add mental health exceptions to a Pro-Life bill prohibiting insurance coverage for elective abortions. He was the only Republican to do so besides Sarah Davis, a former Republican representative who vocally favored abortion and was endorsed by Planned Parenthood.

The next session, in 2019, a bill was proposed to prohibit state tax dollars from funding the abortion industry. King was officially absent without excuse when a few anti-Life amendments were offered by Democrats to severely weaken the bill, particularly amendments 9 and 18. He also publicly and on record voted against a Pro-Life amendment proposed by former Representative Jonathan Stickland that explicitly clarified that the bill does not prohibit cities and counties from restricting abortion. This amendment sparked the Pro-Life movement across Texas where cities are passing local ordinances to establish their communities as Sanctuary Cities for the Unborn. More than three dozen cities have passed this bold ordinance inspired by Stickland’s amendment, including West Texas cities like Lubbock, Nazareth, Abernathy, Levelland, and more. Lubbock’s ordinance forced Planned Parenthood to stop committing abortions. Countless West Texas babies were saved because of this amendment, yet Ken King publicly opposed the effort.

Many GOP voters make the trip to the polls because they desperately want to save lives by electing politicians who will take bold stances against abortion. King has exposed that voting Pro-Life is not a priority of his. He is willing to walk away from, and even stand against the most important Pro-Life votes. The disappointing truth is that Ken King is not “100% ProLife” but only “68% ProLife” at best.