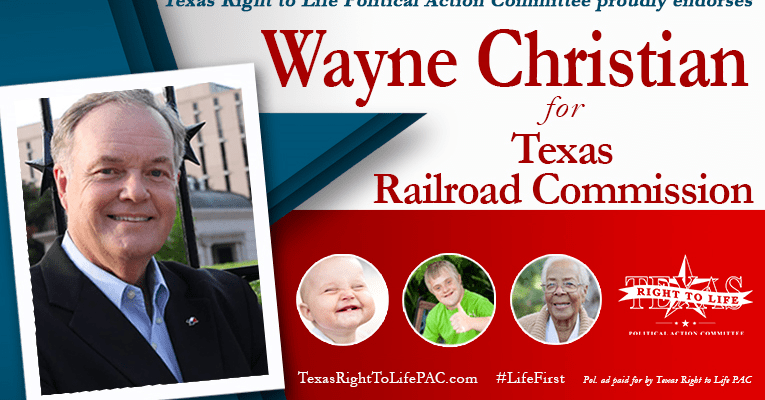 As a state representative from East Texas, Wayne Christian played a key role during the 82nd Session of the Texas Legislature (2011) in removing taxpayer funds from the abortion giant, Planned Parenthood. Christian authored one of Texas Right to Life’s amendments to the state’s budget bill, successfully redirecting funds to assistance programs for individuals with autism and their families. His role in the funding battle proves Christian has a keen sense of the values and public interest of Texas taxpayers.

“Texas Right to Life and Representative Wayne Christian have built a strong relationship over the years, fighting for the rights of preborn, elderly, and disabled Texans. Wayne has never shied away from an opportunity to protect Life, and his record clearly demonstrates he holds an unwavering respect for each individual life, a necessary trait for any person in power over the lives of Texas citizens. We know that we can count on Wayne’s Pro-Life resolve as he continues to serve the people of Texas,” said Emily Cook, Texas Right to Life political director.

Wayne and his wife, Lisa, are members of the First Baptist Church in Center, where he has served as a member of the Texas Baptist Men’s Laity Board. Wayne also serves as a member of the Board of Directors of the Shelby County Senior Citizen Corporation of Texas.

The Runoff Election is Tuesday, May 24th. Early Voting is Monday, May 16th – Friday, May 20th.