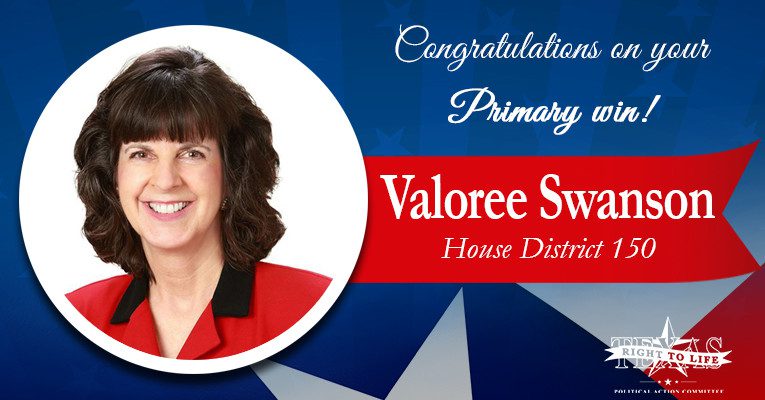 After a decisive victory, Texas Right to Life endorsee Valoree Swanson is the Republican nominee for State Representative in House District 150. Swanson’s district encompasses the communities of Spring and Tomball in Northwest Harris County.

Swanson’s victory is a major upset to the House leadership, a head-scratcher for Texas politicos. Not only did Swanson garner the most votes on March 1, but she fended off three other candidates, netting the majority of votes and avoiding a runoff election. Even more surprising is that one of Swanson’s opponents was the 14-year incumbent, Debbie Riddle, whose conservative leanings diminished as her ties to leadership strengthened. Valoree’s outright victory is indeed a considerable feat.

The race for House District 150 was one of Texas Right to Life’s top three races this election cycle. During the last few sessions of the Texas Legislature, the incumbent took bizarre, anti-Life positions in the powerful House Committee on Calendars, on the floor of the Texas House floor, and in co-authoring anti-patient, involuntary euthanasia bills. To outsiders and legislative observers alike, Riddle’s abandonment of Pro-Life policies (and other conservative issues, such as American Law for American Courts) coincided with her rise in power.

Texas Right to Life PAC helped bring back steady Pro-Life advocacy to House District 150 through the well-run Swanson campaign, through producing and airing our own television commercials, direct mail pieces, live and robo-calls, and targeted online activity, all revealing the incumbent’s disturbing votes and actions in Austin. Texas Right to Life volunteers even knocked on doors and helped inform voters who would have only voted in the presidential primary (known as “POTUS-only” voters), and these concerned voters responded favorably to Valoree’s positive messaging.

Desperate to retain her seat, Riddle employed thug-style tactics to compel voters to believe she hadn’t fallen in-step with liberal leadership. Yelling at Swanson’s volunteers and shouldering her way between voters and Swanson supporters, Riddle proved she was desperate. She even sent staff members to a community townhall in order to verbally disrupt Texas Right to Life when we discussed Riddle’s voting record from the Official Journal of the Texas House of Representatives.

When those rancorous tactics failed, the 14-year incumbent shelled out nearly double what Swanson spent in hopes to win reelection. But deep pockets were not enough to hide a declining record.