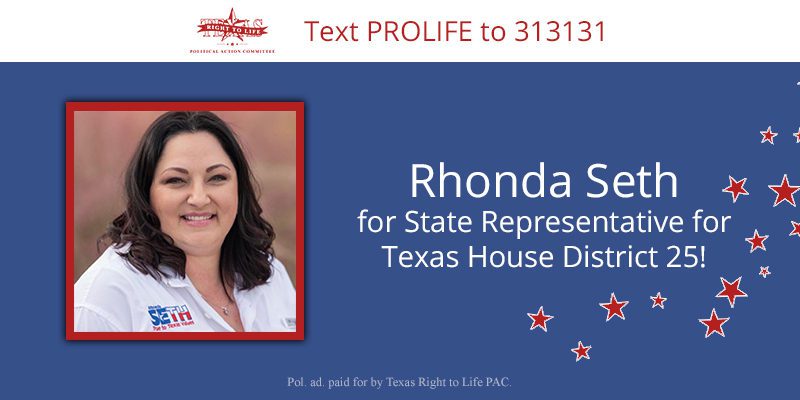 Texas Right to Life PAC has proudly endorsed Rhonda Seth for state representative for Texas
House District 25, comprised of part of Brazoria and all of Matagorda counties. The current
state representative for HD 25 is Dennis Bonnen, the now disgraced speaker of the Texas
House who was caught in an unethical quid pro quo scheme. With Bonnen’s decision not to run
for re-election after over two decades in office, the district has an opportunity to elect a true
conservative, an independent thinker not owned by the Austin swamp: Rhonda Seth.
Even before Bonnen was caught in his unethical dealings and decided not to run for re-election,
Rhonda Seth demonstrated courage and announced her intent to challenge him in the
Republican Primary Election. As a lifelong resident of Brazoria County, she knows the values of
this community and felt they were no longer being properly represented by a 20-year career
politician.

Rhonda Seth is a wife, mother, woman of faith, and emergency trauma nurse. The protection of
innocent human Life is one of Seth’s top issues, and she will ardently protect and defend the
rights of the unborn, the smallest members of our human family who are unable to defend
themselves.

Rhonda Seth is ready and willing to serve the constituents of HD 25 with integrity and with the
true conservative representation that they deserve.

Early voting is February 18-28, and Election Day is March 3. Click here to find out where to
vote. Vote Pro-Life for Rhonda Seth!