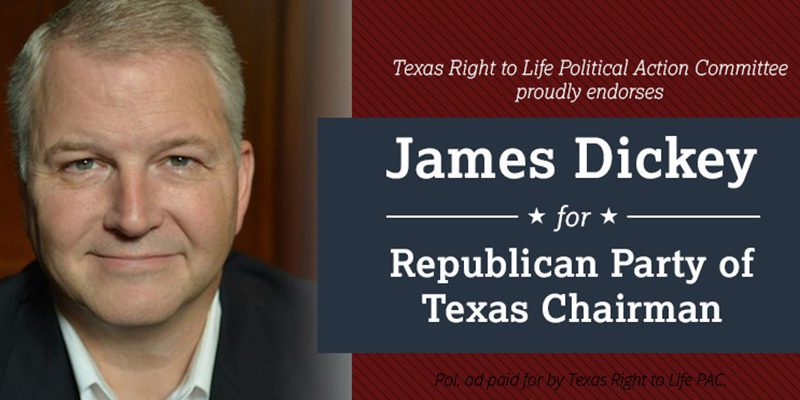 The Republican Party of Texas (RPT) is the only major political party that includes the protection of innocent human Life as a central tenet.  Thus, Texas Right to Life views the state party as a necessary partner in protecting defenseless human beings, born and unborn, through legal, peaceful, and prayerful means.  Texas Right to Life works diligently, both in the state Capitol and in primary elections, to ensure Republican lawmakers and leaders are not just talking the talk but are actually living out the party platform to spare women, children, and families from the pain of abortion and attacks on vulnerable patients in Texas.

For that reason, Texas Right to Life enthusiastically supports the current Republican Party of Texas chair, James Dickey, in his re-election bid this summer.  The State Republican Executive Committee (SREC) initially elected Dickey in 2016 after the chairmanship was vacated.  Republican delegates from across the state will now have the opportunity to elect Dickey officially as state chairman.

Actions speak louder than words.  In the past year, Dickey has fulfilled the promises he made and the vision he cast for the party–promises that directly correlate to saving Life.  For too long, the Republican Party leadership has not only sidelined, but also silenced conservatives.

Republican lawmakers who were not walking in step with the party platform were allowed to “represent” the party in ways that ran contrary to the party’s expressed values and priorities.  High profile examples resided in the Republican House leadership: Speaker Joe Straus (R-San Antonio) and Chairman of House Committee on State Affairs Byron Cook (R-Corsicana), both of whom routinely obstructed Pro-Life legislation in the lower chamber.  Under Chairman Dickey, conservative SREC members finally were able to openly discuss and call for votes to censure these two Republican officials.

In the past, the official Republican Party of Texas did not have a commanding presence during legislative sessions.  However, during the 2017 Regular and Special Sessions of the 85th Texas Legislature, the party faithfully and effectively advocated for the principles and planks of the platform, reminding lawmakers what policies and positions Republican voters expect them to promote while in Austin.  Now, Dickey’s critics bemoan the fact that the party has become “activists,” when he has only worked to promote, praise, and defend the party platform for which thousands of Republican Delegates voted at the last state convention.

Chairman Dickey’s opponents have claimed recently that SREC meetings under Dickey’s tenure have “become divided and contentious.”  When the very heart of the party is at stake, dissension is actually a good thing.  Right now, the Republican Party in Texas, from local county Republican clubs to the State Senate, is at a crossroads.  The platform – which unapologetically stands against abortion and euthanasia – is either meant to be enforced, or is only a suggestion that Republican elected officials are allowed to toss aside whenever doing so benefits them.

The division and contentious nature of recent SREC meetings means conservatives are no longer sidelined.  The Chair is allowing both sides of the party have a voice.  In fact, another one of Chairman Dickey’s accomplishments is unprecedented transparency.  He has incorporated new ways to allow Republicans across the state to see the debate between the two sides of the Republican party in public meetings and online for voters to watch and join the conversation.  The division and contentiousness means the RPT is improving from a social club into a policy-driven body consisting of members who are eager for change and results.  The new party leadership understands that simply electing men and women with an “R” by their name does not complete their duty.  They must also ensure that those representing us and our party in the Legislature are faithful to our values, beliefs, and platform.

This fidelity will establish protecting innocent human Life as a top priority of Republican lawmakers in the 86th Session of the Texas Legislature.

Join us and vote James Dickey for Republican Party of Texas chairman.