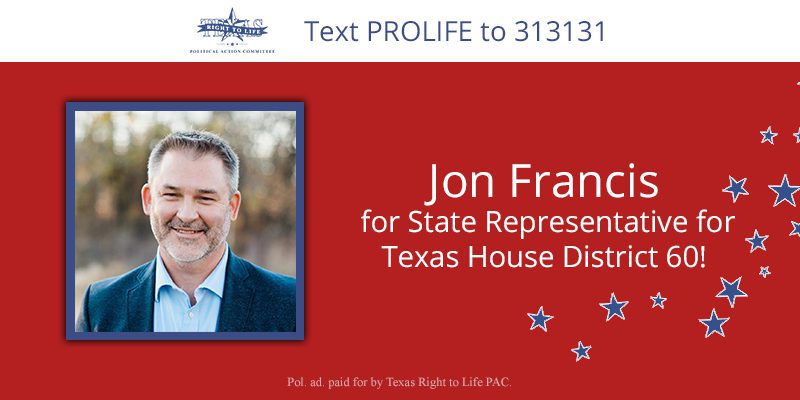 Jon Francis is a husband, father, and small-businessman who served conservative causes you
care about, including being a board member for Live Action and PragerU. Jon didn’t expect to
run for office, but he knew protecting the community’s dearly-held values is a priority in this
election. Watch his recent appearance on the Ben Shapiro Show to hear about the
opportunities for your district and make Texas even stronger.

Jon Francis is ardently and unabashedly Pro-Life and has long been a friend of Texas Right to
Life. He prioritizes the protection of Life from fertilization to natural death, is committed to
abolishing abortion in our state, and aims to fully defund Planned Parenthood of your taxpayer
dollars. As Francis rightly points out, the Austin establishment continues to plummet our state in
Pro-Life rankings, dropping from #4 to #17. Jon Francis is committed to restoring Texas’s
leadership in the national Pro-Life movement by enacting life-saving protections for preborn
children, and his background in the movement shows he believes in this cause as sincerely as
you do.

Early voting is February 18-28, and Election Day is March 3. Click here to find out where to
vote. Vote Pro-Life for Jon Francis!