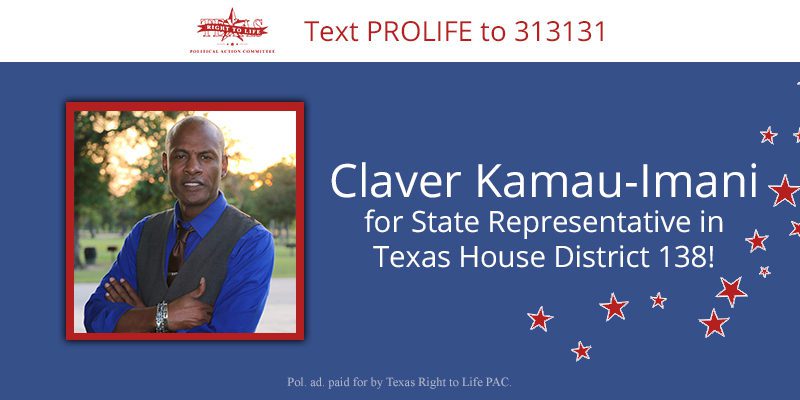 Home » Texas Right To Life.com » Claver won’t cave: Why this Christian pastor is running for state representative in Harris County

Texas Right to Life PAC has proudly endorsed Claver Kamau-Imani for state representative in
Texas House District 138! The current state representative for HD 138 announced he would not
seek re-election, leaving an open race and an opportunity for HD 138 to elect an articulate,
knowledgeable, and vocal conservative to represent you in Austin.

HD 138 is in west Houston, including Spring Branch, Cy-Fair, Bear Creek, and Katy. Claver is a
fifth generation Texan who has lived in this community for over twenty years. He is a pastor and
the president/CEO of RagingElephantsRadio.com, a Texas-focused news source for
proclaiming liberty and encouraging racial minorities to vote in line with their conservative
values.

Claver has promised that the first bill he will file as state representative will be to abolish
the anti-Life 10-Day Rule and protect patients’ rights. This current Texas law allows Texas
hospitals to pull the plug on patients against their expressed medical decision and with only 10
days’ notice. This unethical law is currently in court for a hospital attempting to pull the plug on
one-year old Tinslee Lewis against her mother’s will. Not only will Claver be an outspoken
fighter for protecting patients’ rights, but he will defend preborn Texans and work to abolish
abortion in our state.

In addition to his endorsement from Texas Right to Life, Claver is endorsed by Grassroots
America We the People because of his commitment to grassroots conservatism, his Trump-like
style in speaking the truth boldly and fighting to keep Texas red, and his promise not to cave to
the political establishment in Austin.

Early voting is February 18-28, and Election Day is March 3. Click here to find out where to
vote. Vote Pro-Life for Claver Kamau-Imani!