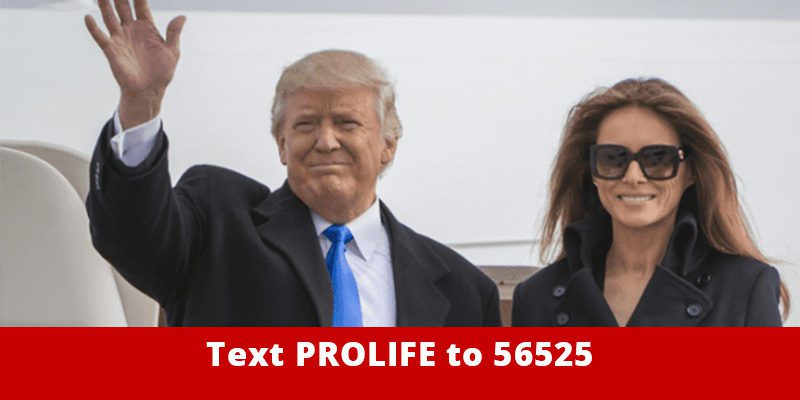 President Donald Trump earned Texas Right to Life PAC’s endorsement for re-election based on his bold stand for Life and unprecedented list of accomplishments on behalf of the Pro-Life cause. Past presidents and Republican national leadership have shied away from the issue of abortion, usually only offering weak platitudes about promoting or respecting Life, but President Trump has consistently and strongly declared his opposition to the practice of abortion in a manner that is unprecedented.

During the 2016 presidential debates, Trump famously announced “I am Pro-Life and will be appointing Pro-Life justices to the court,” contrasting himself with Hillary Clinton, who he said supported late-term abortions that “rip the baby out of the womb of the mother just prior to the birth of the baby.” President Trump has fulfilled his promises, nominating Justices Gorsuch, Kavanaugh, and most recently, Amy Coney Barret to the Supreme Court, along with hundreds of other federal judges to benches across the nation.

During his 2019 State of the Union address, President Trump called on Congress directly to pass laws outlawing late-term abortions on children who can feel pain in the womb, whom he said “are living, feeling, beautiful babies who will never get the chance to share their love and their dreams with the world.” He also berated Virginia Governor Ralph Northam for his comments defending infanticide, saying that the Governor wants to “execute [babies] after birth.”

During his acceptance speech at the 2020 Republican National Convention, President Trump stated that Joe Biden and the Democratic Party’s stance on abortion is directly incompatible with having “empathy for the vulnerable,” and “moral decency.” He then announced: “Tonight we proudly declare that all children, born and unborn, have a God-given right to Life.”

But President Donald Trump has proven himself to be the most Pro-Life President in history based not only by his words, but also his deeds. Apart from being the first President to speak at the March for Life rally, President Trump has accomplished the following: