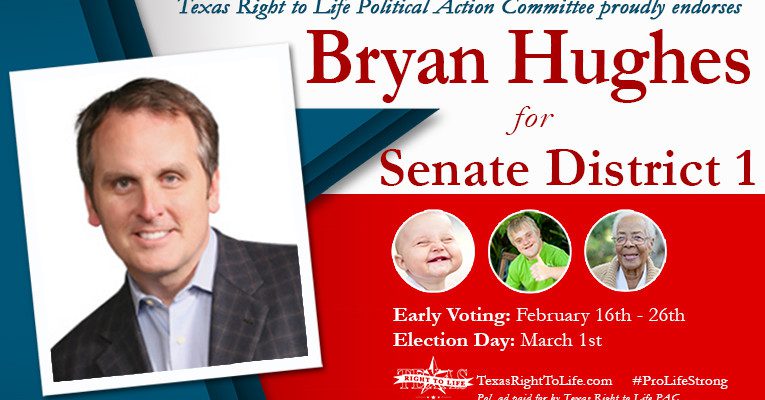 Due to Representative Bryan Hughes’ committed, proven leadership in the Texas House of Representatives on Pro-Life issues, for which he earned the position of the “Pro-Life Whip,” Texas Right to Life PAC endorsed Bryan’s bid for State Senate campaign in the early fall of 2015.

The Longview News Journal recently covered a debate between the candidates running for State Senate District 1 based in East Texas.  During that debate, one candidate attempted to smear Representative Hughes through the early endorsement of Texas Right to Life.  The candidate suggested such an early endorsement was “evidence of corruption” and represented an “IOU to special interests.”  Always quick to defend life, Representative Hughes’ responded: “Yeah, they [Texas Right to Life] are going to expect me to vote to save unborn babies!”

Indeed, saving innocent children is the quid-pro-quo Texas Right to Life expects of all our endorsed candidates.  Pro-Life voters along with Texas Right to Life do expect this of all candidates and incumbents who campaign as Pro-Life.  Regrettably, the last four decades in the State Capitol and on the campaign trail have taught us that many Republican candidates use the Pro-Life rhetoric and vote to win elections, but far fewer actually work to enact Pro-Life policies once in office.

With Bryan Hughes, Pro-Life voters have not only his word, but his unmatched record on Life since 2003.  Representative Hughes stands solid in protecting not only pregnant women and their unborn children, but also vulnerable patients in Texas hospitals whose lives have been threatened by an unjust section of the Texas Advance Directives Act (Health & Safety Code, Section 166.046).  Representative Hughes was the lead author on multiple bills to restore the rights of patients to direct their own health care, despite vicious opposition by the powerful medical lobby.  Bryan recognizes that life and death decisions belong to patients and their families, not to an unelected panel of hospital imperialists who make discriminatory value judgments over a disabled person’s quality of life.

Bryan has also served for many sessions as the Pro-Life Whip of the Texas House, ensuring that all Pro-Life members are united in their strategy on Pro-Life measures.  In 2011, Bryan led the effort to successfully implement Texas Right to Life’s winning strategy of redirecting $64.2 million of taxpayer funds away from the abortion industry in Texas and to other health care programs.  Bryan maintains an eager disposition to further the Pro-Life cause, regardless of whether his name appears on an official record.

Texas Right to Life proudly endorses Honorable Bryan Hughes for State Senate District 1.  We urge Pro-Life Texans volunteer for and to vote for the proven Pro-Life candidate in this race: Representative Bryan Hughes.

More 12 posts in 2016 Endorsements category
Recommended for you

An explanation of Texas Right to Life PAC endorsements