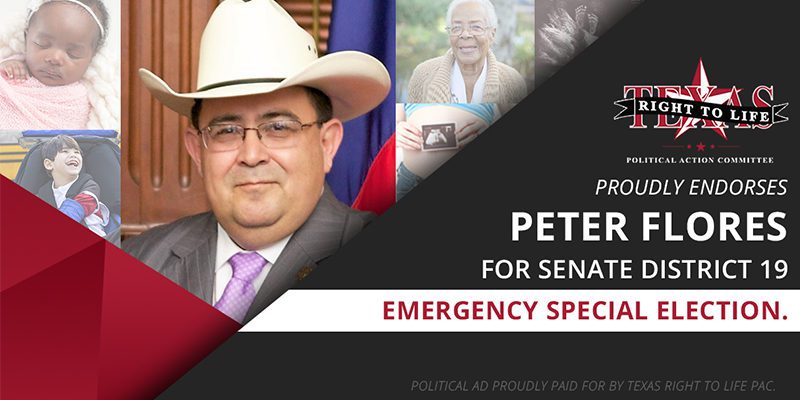 Home » Texas Right To Life.com » Peter Flores is the only Pro-Life option for Senate District 19

After the resignation of convicted felon Democrat Carlos Uresti, voters of Senate District 19 have the opportunity to elect his successor in an emergency special election on July 31.  Four Democrats, three Republicans, and a Libertarian are on the ballot, but the race has boiled down to three main candidates: two familiar Democrats and one Republican. Texas Right to Life has endorsed Pro-Life Republican Peter Flores, who is running an insurgent campaign against two Democrats with radical pro-abortion track records.

Peter Flores’ two Democrat opponents are former U.S. Representative Pete Gallego and current State Representative Roland Gutierrez (D-San Antonio).  Gallego, who spent only one term in Congress before being defeated by Republican Will Hurd (TX-23), positions himself as more of a moderate Democrat.  But his voting record shows the contrary. Gallego’s record is evidence that he not only wants abortion on demand until birth, but also that he wants YOU to pay for them.  He voted twice against prohibiting taxpayer-funded abortions, meaning he wants hard working Americans, including the voters of SD 19, to subsidize them.

Even more egregious is his support for late term abortions.  Gallego voted against the federal Pain-Capable Unborn Child Protection Act, which prohibits abortions 20 weeks after fertilization.  The life-saving bill contained exceptions for Life of the mother and rape and incest, but that did not deter Gallego in his vote. Six Democrats voted in support of the common-sense and humane policy, and a recent poll indicated more than 60% of Americans support the measure.  Only seven countries have an abortion regime as radical as the United States, among them China and North Korea.  Gallego’s vote implies he is content with such a reality.

The other Democrat running, Roland Gutierrez, holds the same position.  As a State Representative, he consistently earns a 0% rating on the Texas Right to Life Pro-Life scorecard.  In his time as a Representative, Gutierrez has voted in support of late term abortion more than a dozen times.  He will bring that same despicable voting record to the Texas Senate.

Both of these candidates are unacceptable options for Texans who value Life.  The views of each State Senator are magnified in a chamber with only 31 members.  Gallego or Gutierrez would bring a pro-abortion agenda to the State Senate in the mold of Wendy Davis.  A vote for Pete Gallego or Roland Gutierrez is a vote for abortion at any time in pregnancy for any reason paid for with Texans’ taxpayer dollars.

Fortunately, voters in SD 19 have a staunchly Pro-Life candidate they can support in the special election. Electing Peter Flores will significantly improve the Pro-Life credentials of the State Senate. Flores will defend the voiceless from the injustices of elective abortion and the quality of life medical ethic.  If you live in SD 19, support Peter Flores to protect all Texans. Early voting is ongoing, and election day is July 31.