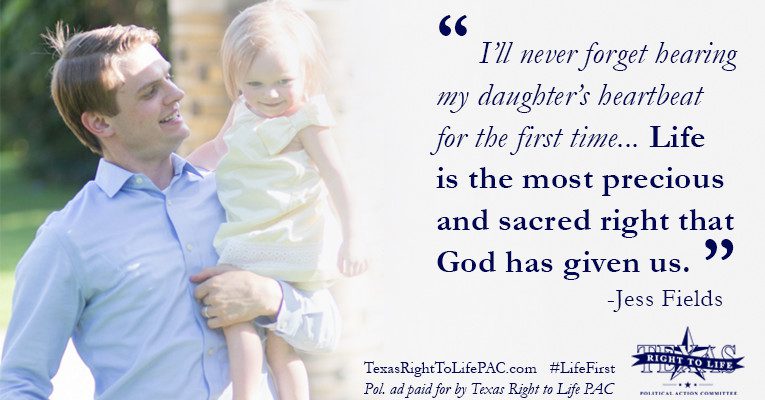 Home » News » Jess Fields: “Life is the most precious and sacred right that God has given us.”

“I’ll never forget hearing my daughter’s heartbeat for the first time. Sadly, some in our society view the unborn not as unique individuals created in the image of God, but as mere clumps of tissue that can be aborted or experimented upon. I find such a notion to be morally reprehensible.

Life is the most precious and sacred right that God has given us. I believe that life begins at conception, and will fight to protect life from conception until natural death.”

Why does he feel called to lead?
“My hard work and leadership brought real reforms to College Station. These efforts earned me the ‘most conservative’ label from the Bryan-College Station Eagle.”

Jess attended Texas A&M University, where he met his wife, Courtney, in the College Republicans and started a small retail business at the age of 19, Texas Avenue Cigars.  At 22, Jess was elected as a College Station City Councilman, where he fought for lower taxes, less spending and debt, and more freedom for small businesses and homeowners.  Fields is no stranger to fighting for the rights of those in his community.