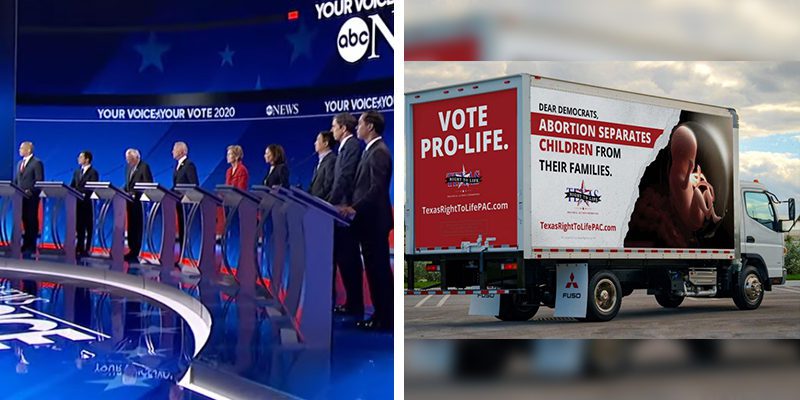 Home » 2020 Election » News » Despite silence in the third debate, Democrats are still radical on abortion

The Democratic presidential candidates fill a significant amount of rhetoric with words such as “empathy,” “humane,” “justice,” “equality,” etc.  They then spend big money promoting those words and the ostensible meaning behind them: “I am the most compassionate candidate in the party of compassion.”

But these words ring hollow, thanks to their betrayal of preborn children.  The Democratic candidates may shed tears for family separation at the border, but they’re more than willing to abet and celebrate family separation — and destruction — in the womb.  Texas Right to Life recognized the irony of the Democratic candidate’s antithetical positions, which prompted us to educate the candidates, voters, and media of the hypocrisy through a rolling billboard at the Democratic debate in Houston.  Abortion separates children from their families.

At the debate, a group of Pro-Life activists largely occupying the left side of the political spectrum proclaimed their dissatisfaction.  No Democrat in the field has seen a pro-abortion law they do not like. They are wildly out of step with not only the general voting population but with fellow Democratic voters.  To the Pro-Life activists at the rally, the present field of Democrats is unacceptable.

The debate itself was devoid of any talk on abortion.  For three hours, the candidates were able to elude accountability for their radical embrace of taxpayer-funded abortion on demand.  But Beto O’Rourke didn’t view this in relief. He complained that “not one question on abortion” had been asked by the moderators, which is truly a shame.  Had the moderators asked a question about abortion, voters would learn that Beto O’Rourke refuses to name even one protection for preborn children that he could support.

Beto is not alone.  Throughout the campaign, Democrats have ceaselessly enlightened the public of their radical pro-abortion beliefs.  Bernie Sanders  embraces population control by murdering unborn children in the womb.  Julian Castro supports the right for biological men to obtain abortions.  Joe Biden no longer supports the Hyde Amendment, meaning he wants to force American taxpayers to pay for abortions.

Despite their support of abortion-on-demand until birth, each candidate portrays himself or herself as the compassionate alternative to President Trump.  Compassion, though, is a grossly misunderstood word. The Latin roots of the word reveal the proper understanding is “to suffer with.” Authentic compassion would be shared with the most vulnerable, the utterly helpless, who cannot defend themselves in the face of a culture that devalues their existence.  Yet, the Democratic candidates permit and impose so much suffering on preborn children. The Democratic primary? No compassion there.

Not a single Democrat on the debate stage in Houston supports protecting preborn children at any point during pregnancy.  Not a single one of them supports protecting the consciences of Pro-Life Americans by prohibiting the funding of elective abortion through taxpayer dollars.  Next time the Democrats decry the humanity of family separation, ask why they support funding the destruction of the smallest member of families.