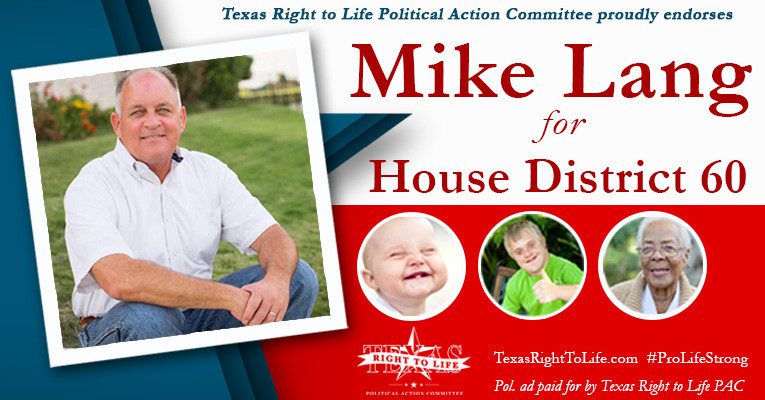 In Hood County, a Republican will almost certainly represent the constituents in the Texas House of Representatives.  Such reality is not news to the Hood County Democrat Chair Robert Vick, who recently provided the best evidence that Mike Lang is the conservative, Pro-Life choice for HD 60.

In emails that recently surfaced, Vick asked his fellow Democrat challenger to drop out of the race for Hood County Democrat Chair, eliminating the only contested race on the Democrat ballot. The reason why may surprise you: so Democrats will be “free” to cross over into the Republican primary to help elect Kevin Downing to the Texas House! Typically, those who are favored by the Democratic party are much less likely to stand firm on protecting innocent human Life, and should be concerning to every Pro-Life voter in Brown, Callahan, Coleman, Eastland, Hood, Palo Pinto, Shackelford, and Stephens counties.

Vick is terrified of the possibility that Mike Lang, endorsed by Texas Right to Life, will represent the voters of HD 60.

Such a strategy has raged in Republican primaries, evidenced by the breathtaking revelation of out-going State Representative Patricia Harless (R-Spring).  Harless admitted on-record that in numerous elections “Democrats crossing over” was how she won re-election.

Voters, be wise to this strategy: Cast your vote for the true Pro-Life candidate in the race, Mike Lang.  Mike has committed to fight for the most vulnerable among us – the preborn, the disabled, and the elderly.

The lives of the preborn are too important to trust to a candidate whom anti-Life Democrats would prefer.

Please join us, and vote Mike Lang for State Representative!